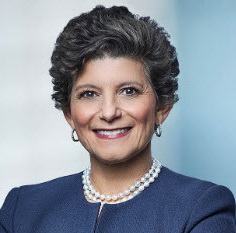 Debra A. Cafaro is the Chairman of the Board and Chief Executive Officer of Ventas, Inc., an S&P 500 company and real estate investment trust that owns approximately 1,200 healthcare, research and innovation and senior living properties in North America and the United Kingdom and serves as the premier capital provider to leading care providers and research institutions.

A recognized industry leader, Cafaro set and oversaw execution of a long-term strategy that drove Ventas’s market capitalization to $28 billion in 2019, from $200 million since her leadership began in 1999. The Company’s compound annual total shareholder return (TSR) has exceeded 23 percent since January 1, 2000.

Widely-acclaimed for her strategic vision and enduring business success, Cafaro has received multiple professional recognitions. Cafaro has been twice named one of the World’s 100 Most Powerful Women (Forbes Magazine), a list of global political, media, entertainment and business leaders; a Top 100 Best-Performing CEOs in the World, for six consecutive years (Harvard Business Review); and the top female executive in the commercial real estate industry (National Real Estate Investor). She has also been recognized as one of the 100 Most Influential People in Healthcare six times (Modern Healthcare); highlighted in The 70 Elite real estate executives who shaped the industry for the past 70 years (Real Estate Forum); and selected multiple times to the Top 25 Women in Healthcare (Modern Healthcare) and the All-America Executive Team (Institutional Investor). Cafaro was named a Top 50 Woman in World Business (Financial Times), one of the Bankable 21 CEOs in Jim Cramer’s book Get Rich Carefully and one of nine Game-Changers in commercial real estate since 2000 (GlobeSt.com). To honor her contributions to her industries, she received the Industry Leadership Award from the National Association of Real Estate Investment Trusts (NAREIT), where she previously served as Chair, and was inducted into the ASHA (American Seniors Housing Association) Senior Living Hall of Fame.

In addition to her work at Ventas, Cafaro is broadly engaged across business, public policy, academic, sports and non-profit sectors. Cafaro is the Chair of the Real Estate Roundtable, a public policy organization that brings together leaders of the nation’s top real estate firms to address key national policy issues relating to real estate. She is also the Chair of the Economic Club of Chicago whose mission is to foster meaningful connections among the city’s leaders on important economic and social issues. She is a member of the Business Council, and serves on the Boards of The PNC Financial Services Group, Inc. (NYSE: PNC), the University of Chicago and the Chicago Symphony Orchestra. She served successive terms on the Board of the Chicago Infrastructure Trust. Cafaro is an owner and member of the Management Committee of the NHL Pittsburgh Penguins, 2016 and 2017 Stanley Cup Champions.

Prior to joining Ventas, Cafaro was President and a Director of an NYSE-listed multi-family REIT, a practicing lawyer for 13 years and a judicial clerk for the Hon. J. Dickson Phillips, U.S. Court of Appeals for the Fourth Circuit.