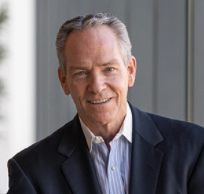 John Fish is Chair of The Real Estate Roundtable's Board of Directors.  His three-year term began on July 1, 2021.

Mr. Fish is the Chairman and CEO of Suffolk. Under his vision and leadership, Suffolk has grown into one of the leading privately held general building contractors in the country. With approximately $4 billion in annual revenue, Suffolk is currently ranked #23 on the Engineering News-Record national list of “Top 400 Contractors.”

He is a fixture on numerous Boards focused on improving the economy, strengthening business and creating jobs. He sits on the Board of Directors of The Real Estate Roundtable, sits on the National Construction Industry Roundtable and is a member of the National Business Roundtable. He is the founding member and former Chair of the Massachusetts Competitive Partnership (MACP), former Chairman of the Board of the Federal Reserve Bank of Boston and former Chair and current Executive Committee member for the Greater Boston Chamber of Commerce. Mr. Fish is on the Executive Committee of the Real Estate Board of New York and a member of the Partnership for New York City and New York Building Congress.
John Fish serves as Chair of Brigham and Women’s Hospital and sits on Mass General Brigham’s Executive Committee. He is also serving as Chairman of the Board at Boston College—he was the first non-alumnus to ever fulfill that role. He sits on the Board of Trustees for Bowdoin College. He is also the founder and Chairman of Scholar Athletes, a program that leverages the proven link between school athletics participation and strong academic performance to improve the academic performance of inner-city high school students.

Mr. Fish is a graduate of Bowdoin College in Brunswick, Maine with a Bachelor’s Degree in Political Science.  He received an Honorary Doctorate of Engineering Technology Degree from Wentworth Institute of Technology. He is also the recipient of an honorary degree from Regis College and Curry College.