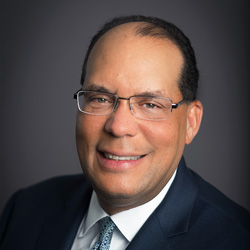 Thomas J. Baltimore, Jr. is Chairman, President and Chief Executive Officer of Park Hotels & Resorts (NYSE: PK). Park is the second largest lodging REIT with 49 premium-branded hotels and resorts with over 30,000 rooms located in prime U.S. markets with high barriers to entry and approximately $10 billion in assets. Park was established in early 2017 as a spin-off from Hilton Worldwide. In September 2019, Park acquired Chesapeake Lodging Trust in a $2.5-billion transaction, adding 18 high-quality hotels and resorts to Park’s portfolio and providing brand, operator and geographic diversity. Park is focused on assembling a premier portfolio of upper upscale and luxury assets in top 25 markets in the US and premium resort destinations.

Mr. Baltimore was President, Chief Executive Officer and Director of RLJ Lodging Trust until he resigned in May 2016. In May 2011, Mr. Baltimore successfully led the roll-up and merger of RLJ Development, a hospitality investment firm, with its two affiliated private equity funds, and the subsequent initial public offering of RLJ Lodging Trust (NYSE: RLJ). RLJ is one of the largest U.S. publicly-traded lodging REITs with 101 hotels with more than 20,900 rooms, located in 23 states and the District of Columbia.

Mr. Baltimore was the co-founder and President of RLJ Development, with direct day-to-day responsibility for company operations since its inception in 2000. Under Mr. Baltimore’s leadership, RLJ, through its affiliated private equity funds, raised over $2 billion in equity from major public and corporate pension funds, financial institutions and insurance companies, and acquired or disposed of nearly $7 billion in hotel real estate. Prior to launching RLJ, Mr. Baltimore was a seasoned hospitality executive and between 1988 and 2000, Mr. Baltimore served in senior-level positions at Hilton Hotels Corporation, Host Marriott Services Corporation (Marriott spin- off) and Marriott Corporation, where he was involved in business development, finance and acquisition roles. Mr. Baltimore commenced his career in public accounting at Price Waterhouse.

Mr. Baltimore earned a B.S. degree from the McIntire School of Commerce at the University of Virginia and an M.B.A. from the Colgate Darden Graduate School of Business Administration at the University of Virginia where he is an occasional guest lecturer. Mr. Baltimore was recipient of the 2020 Charles C. Abbott Award, the highest honor bestowed upon a Darden School graduate. Mr. Baltimore serves on the board of Prudential Financial, Inc. (NYSE: PRU) where he chairs the Investment Committee and serves on the Risk and Compensation Committees and is a former Lead Director. He also serves on the board of American Express Company (NYSE: AXP). Mr. Baltimore is a former Director of AutoNation, Inc. (NYSE: AN), Duke Realty Corporation (NYSE: DRE) and Integra Life Sciences Holding Corporation (NASDAQ: IART). Mr. Baltimore is a past chair (2018) of the National Association of Real Estate Investment Trusts (Nareit) Executive Board. He is a member of the American Hotel & Lodging Association (AHLA) Executive Committee and also serves on the boards of the University of Virginia Investment Management Company (UVIMCO) and The Real Estate Roundtable.