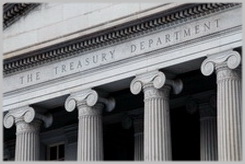 In a positive sign, a swath of energy efficiency bills are moving through both the Senate and House, indicating that energy policy could pass in a divided Congress.  ( The Washington Examiner , July 18)