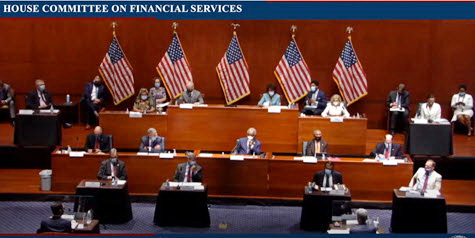 Mnuchin also discussed the Administration’s work with Congress to address the economic fallout from the outbreak with The Roundtable’s President and CEO Jeffrey DeBoer during the organization's Virtual Annual Meeting last month. Secretary Mnuchin emphasized how recent improvements to the Paycheck Protection Program (PPP) has helped small business borrowers deal with the economic impact of the global pandemic.  He added that the Administration is also considering business liability protections and pandemic risk insurance.  (Watch the discussion on The Roundtable's Youtube channel here.)

The House and Senate this week passed an extension to the Paycheck Protection Program (PPP), allowing small businesses to apply for these loans until August 8. President Trump is expected to sign the extension into law. (CQ, July 1)

Mnuchin also told the House Financial Services Committee (HFSC) that he supports congressional legislation to repurpose the remaining PPP funds.  “There appears to be bipartisan support in the Senate to repurpose the (funds) for PPP, extending it to businesses that are most hard hit, that had a requirement that their revenues have dropped significantly, things like restaurants and hotels and others where it is critical they get people back to work.”

HFSC Chairwoman Maxine Waters (D-CA) led the effort for House passage this week of the Emergency Housing Protections and Relief Act of 2020 (H.R. 7301), which supplements housing assistance provisions passed in May as part of the HEROES Act.  (Rep. Waters House floor statement, June 30 and Roundtable Weekly, May 15.)

The letter states, “A protracted eviction moratorium does not provide a sustainable, long-term solution for American families facing financial hardship and we oppose the inclusion of this provision for the severe consequences it will have that ultimately blunt the impact of the positive components of the legislation.”  (NMHC, June 29)

This week’s action on COVID-19 related policy comes as Democrats and Republicans consider an additional coronavirus relief package after they return from the congressional July 4 recess.

Congress will have an 11-day window in late July to act on another stimulus package.  President Trump yesterday said he supports another round of direct stimulus payments as part of a potential phase four coronavirus relief package.  "We're working on a 'phase four.' We're working with Congress," Trump said. "Work has started."  (Axios, July 1 and Fox Business, July 2)