In many parts of the country, there is a severe shortage of affordable and workforce housing.  Supply constraints, often related to restrictive state and local policies, exacerbate the problem. 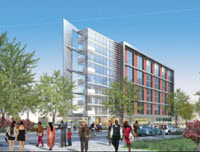 The Roundtable supports well-designed government programs that seek to increase the nation’s stock of affordable, workforce, and market-rate housing, such as the low-income housing tax credit (LIHTC).  At the same time, The Roundtable opposes well-intentioned but poorly designed rent control regimes that distort markets, depress business investment, and contribute to housing shortages.

The federal government provides housing assistance through a variety of programs—portable vouchers that can be used in the private market; project-based rental assistance that provides subsidized rent in designated, private buildings; and subsidized rent in publicly owned buildings (public housing).  In addition, the low-income housing tax credit (LIHTC) subsidizes the production of rental housing for income-eligible tenants.

LIHTC is an effective, market-based tool to help address the shortage of affordable housing in the United States. Created in the Tax Reform Act of 1986, LIHTC was made permanent in 1993 and further strengthened during the Bush and Obama Administrations.  In practice, States receive LIHTC credit authority, which then is allocated competitively to developers who build or rehabilitate rental housing for low-income tenants.  Developers typically exchange the 10-year stream of credits for up-front equity capital from investors.  Since its enactment, LIHTC has financed the development of 3 million apartments, providing homes to approximately 7 million low-income families.

The 40 percent reduction in the corporate tax rate in the Tax Cuts and Jobs Act indirectly reduced the value of the LIHTC and demand for the credit. The Roundtable is working with industry leaders and stakeholders to analyze the extent of market disruption caused by tax reform and identify potential solutions.

In March 2018, Congress temporarily increased the cap on LIHTC allocation authority and modified the rules to allow income averaging across units when measuring compliance with the program’s income requirements.  Such steps are welcome and an important step forward.

The Roundtable supports the Affordable Housing Credit Improvement Act of 2019 (H.R. 3077, S. 1703), [link] bipartisan legislation to expand and strengthen LIHTC.  Introduced by Senator Maria Cantwell (D-WA), Representative Suzan DelBene (D-WA), and others, the bill would increase LIHTC authority by 50 percent and incentivize the building of more than 500,000 affordable homes.

Secretary of Housing and Urban Development (HUD) Ben Carson chairs the council, which will engage State, local, and tribal leaders to identify and remove obstacles that impede economic growth and the development of new affordable housing.

The council will include members from across eight Federal agencies who will analyze how Federal, State, and local regulations affect the costs of developing affordable housing and the economy.  It will also recommend ways to reduce regulatory burdens at all levels of government that hinder affordable housing development. (White House Fact Sheet, June 25)